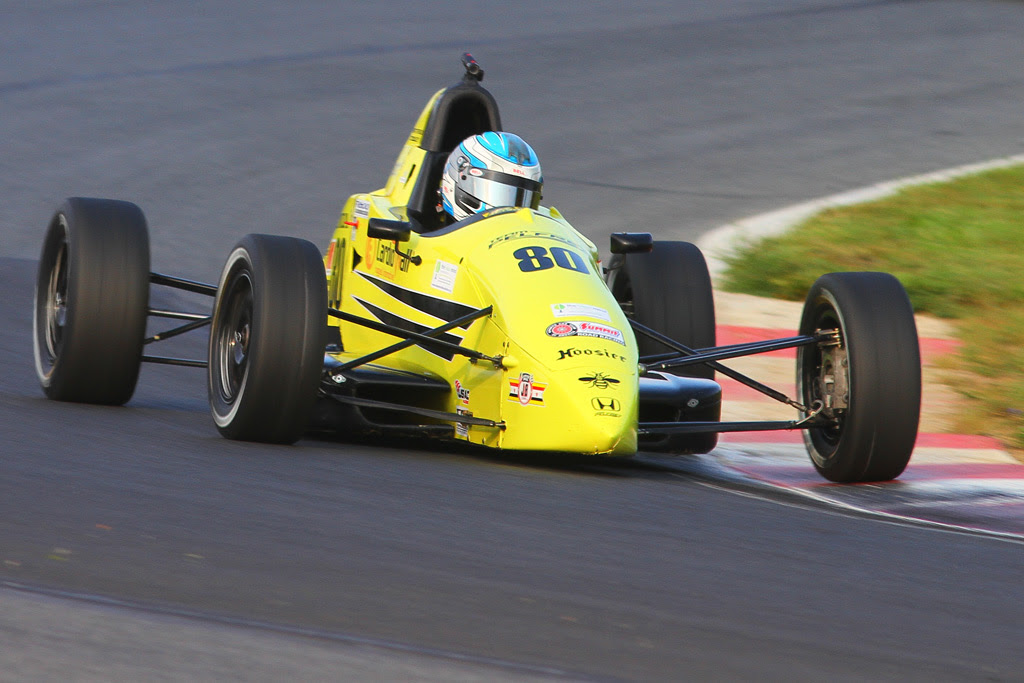 Matthew Cowley took the checkered flag for the win in round 15 of the 2017 F1600 Championship Series season as the Team Pelfrey driver extended his Championship lead in the No. 80 Mygale/Honda. Cowley triumphed over K-Hill’s Zach Holden, who charged back from last to second after an unscheduled pit stop. Jonathan Kotyk finished third and a fight of the race in the Masters Class division was won by Mike Scanlan.

“At the start we managed to break away and there was a safety car period. After that I managed to keep my nose clean for the first few laps and bring the win home.”

“It was a bit disappointing. I had to pit because the radiator was filled with grass. Once we came out I knew it was head down and go for them. One more lap and I think we could have had him.”

“It was a pretty tough fight for the Gap Guard Team Pelfrey car. There was a lot of defensive driving in we unfortunately lost the leaders.”

“I had a feeling Joel was hanging back for the last lap. I had just enough to stay ahead there at the end.”

“I gave it my best shot and Mike had a bit more. We’ll try again tomorrow, and thanks to Greg Rice and Rice Race Prep.”

“We keep chipping away at the speed and it’s good to be back here. It was a blast. I didn’t have anything for them, I was just hanging back.” 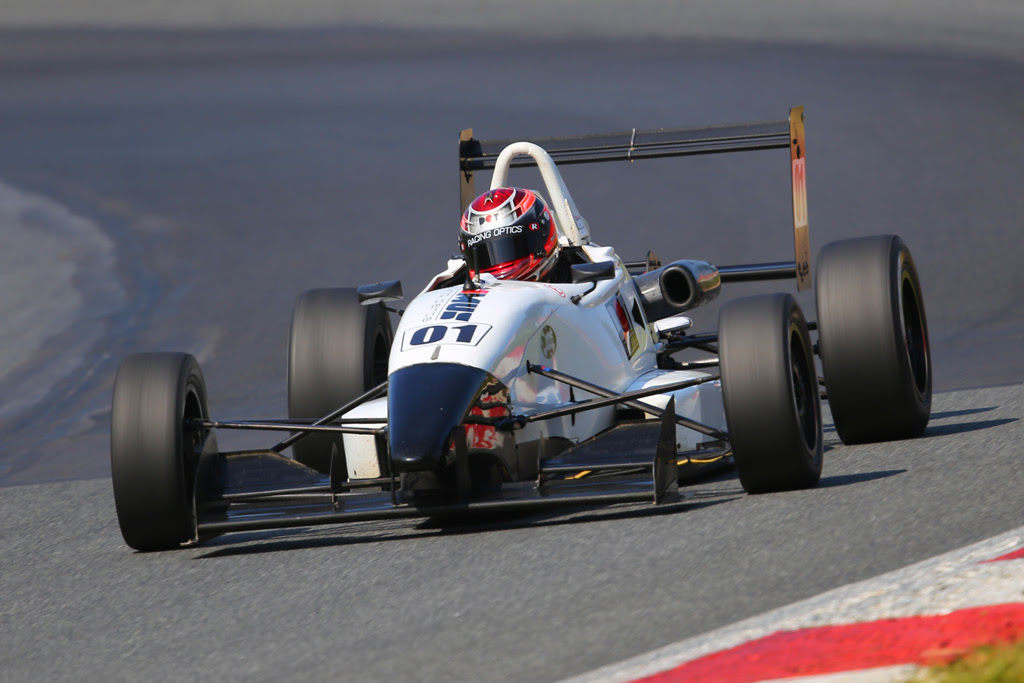 John McCusker, in the No. 01 DotWorks Racing entry, prevailed to win in the Glenn Phillips Memorial Classic, in an action-packed Saturday afternoon F2000 Championship Series race at Summit Point. Tim Paul and Tim Minor completed the podium in round 11 of the 2017 season.

McCusker won the race run in honor of late team owner Glenn Phillips, taking the lead with an outside move in turn one on lap one. He then had his hands full on a restart with Paul, as the two went side-by-side for the lead, with McCusker coming out ahead. Then Paul spent the rest of the race fending off Minor in a heated battle for second.

The result also throws a major twist into the Championship standings. Points leader Brandon Dixon only finished tenth, while McCusker surges even closer to Dixon with a major points haul following his second victory of 2017.

Steve Jenks finished fourth in a loaned car from ADSA/Wright racing, which he got his first laps in during the race. Davy D’Addario completed the top five.

“I had a really good start, braking deep and opening up a gap. I was let down by the full course caution but on the restart we opened it back up after Tim tried to pass me.”

“I would have loved to win for Glenn but I’m happy with the pole and result. The racing was really hard. Tim and I were close and running each other hard. People ran super close, super tight and clean.”

“The setup I chose for this morning was not the right call. I went the right direction, but these cars are so even you really need to hit the mark. John and Tim did a good job. They raced clean. This is a great Series, more people need to come out and race. We were nose to tail, we give and take. I got a great start, Tim came over, and gave me just enough room.”

For F2000, it was the second annual Glenn Phillips Memorial Classic, run in memory of the late team owner from GTP Motorsports. Matt McDonough won the first annual race in 2016, which was held in May at Watkins Glen International. McDonough failed to finish Saturday’s race with an overheating issue on the No. 9 entry. 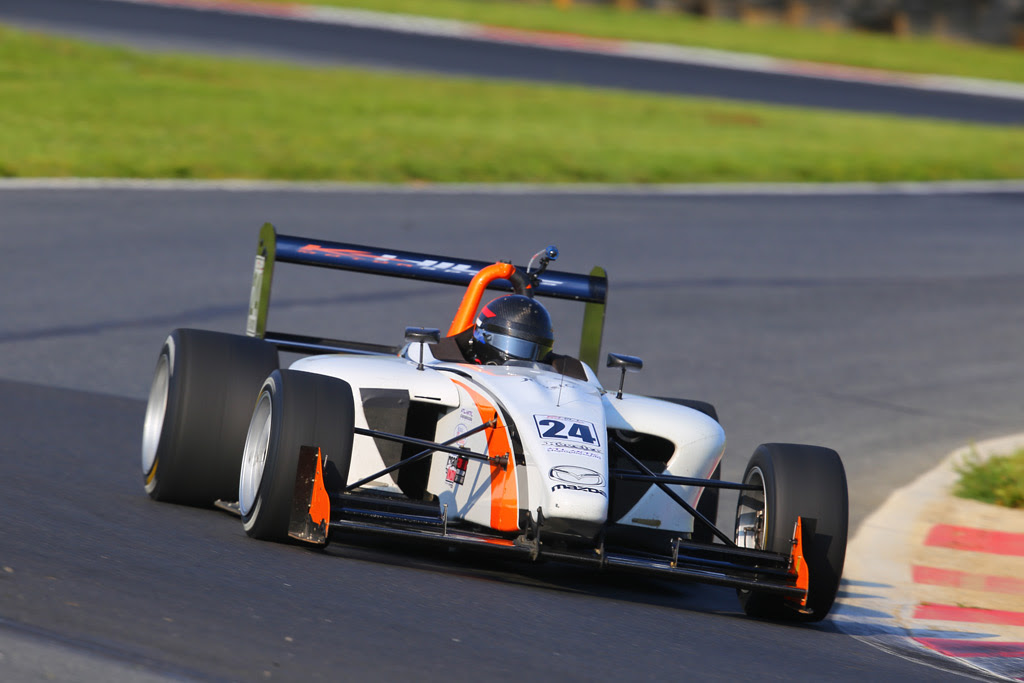 Peter Portante charged through the field to win the 11th round of the 2017 Atlantic Championship Series held on Saturday at Summit Point Motorsports Park. Portante, driving the No. 24 for K-Hill Motorsports, joined the pace lap late and could not start from pole, having set the absolute track record in morning qualifying. Starting from the back, the points leader moved through the field quickly, taking the lead from David Grant on lap 13. Grant finished second for Polestar while Matt Miller completed the podium in his season debut.

“This is great. You can put a monkey in that car and make it go fast, so all the credit goes to the boys at K-Hill Motorsports and Guinness. It was an amazing race. We caught the field on the pace lap and then battled with Keith (Grant) and David. I didn’t get to battle much with Keith, something happened to him. But David, he is always fun to battle with.”

“We went one direction with the car this morning, and went the other way this afternoon. The car just wasn’t there like it was earlier. Hopefully we’ll get it back right and do it again tomorrow.”

“It has been a good weekend so far, I hope it continues. I was here three years ago and it’s great to be back in the Atlantic Championship Series.”

“It was a fun race. Forty minutes went by faster than I thought. The Company Motorsports car was hooked up and ran well the entire time.”

Of note, Championship contender Keith Grant ran as high as second early in the race but retired with a reported mechanical problem.

The Summit Point weekend continues for Formula Race Promotions on Sunday with double races for F1600 and single races for F2000 and Atlantic.