SUNNY SIDE UP; COURTNEY CAPTURES NIGHT 2 OF “SMACKDOWN” AT KOKOMO

SUNNY SIDE UP; COURTNEY CAPTURES NIGHT 2
OF “SMACKDOWN” AT KOKOMO
By: Richie Murray – USAC Media
Kokomo, Indiana………Sprint Car racing is chock full of ups and downs. Sometimes you’re in victory lane and sometimes you end up on your head.
Tyler Courtney experienced both of these extremes Friday at Kokomo Speedway, recovering from a hard flip during qualifying before returning to action after several other teams pitched in to make repairs. With a lap 10 pass of Hunter Schuerenberg, Courtney persevered to win “Sprint Car Smackdown VI” Night 2 at the very track where it all began for the Indianapolis, Indiana driver affectionately known as “Sunshine.”
“My first USAC start was the first Smackdown,” Courtney reminisces. “To watch it come full circle is pretty cool. I know it’s not my first USAC win, but to get my first Kokomo sprint car win tonight is pretty dang special. This place is tough to tame and the guys who’ve won here are some of the best to ever do it. This one ranks right up there with a lot of the big ones I’ve had. Plus, if you would’ve told me I’d win four USAC races in one year, I would’ve said you’re crazy. I would’ve been happy just winning another one!”
Courtney’s ProSource Qualifying incident came a lap after nailing down second-quick time in his TOPP Motorsports/TOPP Performance Race Parts – Custom Pump & Controls/Maxim/Claxton. Track position is critical at every circuit on the schedule and each position gained through time trials is essential to making the task just a little easier with less cars to pass come feature time.
“I was really frustrated with qualifying 16th last night,” Courtney admitted. “I knew I had a pretty decent lap on the first one. You have to hang it out in qualifying to be up there in the top-six where you want to be. I just got in there too straight, biked ‘er up and set her down. That shot me right into the fence and it was over after that. It’s part of the deal. You just have to persevere through it. With help from half the pit area, we got it back together and almost transferred out of the heat race. Running the B-Main helped us tonight. My guys never give up on me and I never give up on them.”
Courtney’s fifth-place run in the heat put him one spot out of a transfer position, relegating him to the semi-feature and a second-place finish there. Courtney felt the car was a continuous “work in progress” throughout the night following the crash and that it was making a couple unfamiliar noises it wasn’t used to making. However, his qualifying efforts did procure him a spot inside the fourth-row for the feature where he quickly went to work. 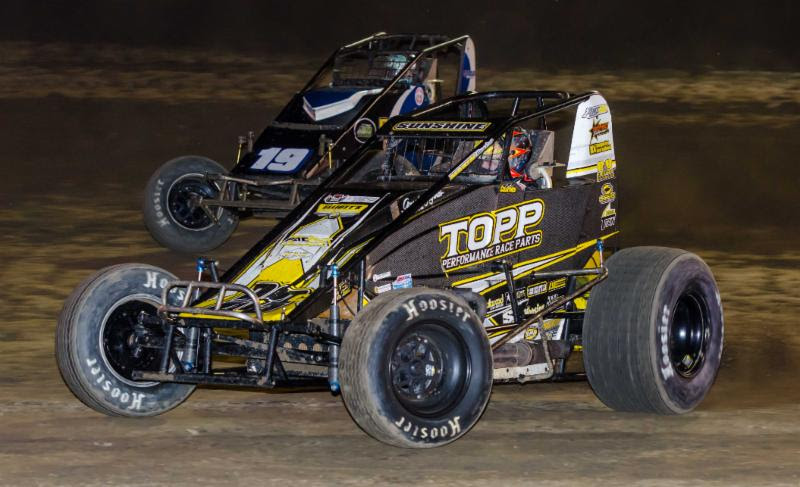 Initially, it appeared as if the 30-lapper was going to be a carbon-copy of the night before when fourth-starting C.J. Leary ripped the cushion to the lead exiting turn two at the start. The rocket ship would quickly be grounded, though, when, on the second time around, Leary snagged the turn one curb before contacting the concrete and nosing over, ending the race for the previous night’s winner after only one lap.
The tumultuous start would continue one lap following the restart when two-time USAC Silver Crown champ seventh-place running Kody Swanson got sideways at the exit of turn four, then nailed the infield tire, sending him into a series of flips that he would walk away from unscathed.
Schuerenberg took a hold of the lead when racing resumed as a wild scramble for position ensued behind him between Justin Grant and Tyler Thomas. On lap eight, Thomas aimed for the race lead with a slider between turns one and two on Schuerenberg. Exiting the second turn, the two made contact, pitting Thomas sideways halfway down the back straightaway, yet was able to maintain control and hold onto the second position for the time being.
The little bit of contact was Courtney’s gain as he ate up ground on the bottom while running fourth and, a lap later, used a surge down the back straight to whip past both Grant, then Thomas in quick succession to get to second. On the tenth lap, Courtney continued to crawl the bottom to move past Schuerenberg for the race lead exiting turn four, holding the spot by a car-length at the line at the conclusion of the lap.
With ten to go, Schuerenberg found his second wind through the middle and began to pulley himself back to within range of Courtney. Schuerenberg showed a nose to the outside of Courtney off turn two and, as Courtney noticed the bottom beginning to fade, he slid up to the middle lane entering the first turn on the 24th lap just in the nick of time to shield his position and deter the Schuerenberg charge.
Following a yellow for the turned around car of Shane Cottle with six laps remaining, Courtney ventured to the top with Kevin Thomas, Jr., Brady Bacon, Tyler Thomas and Schuerenberg duking it out for the runner-up spot. T. Thomas rung it out on the topside on lap 26, crossing over from high to low off turn four, then splitting between Bacon and Thomas on the front straight entering turn one to take second. K. Thomas countered under T. Thomas through the middle as Bacon lay low to make it three-wide off two.
A half-lap later, T. Thomas swung wide off turn four, nearly making contact with the outside wall. K. Thomas then ramped his right rear over the left front of the sideways T. Thomas, stifling his trek to the front and sending him back to fourth. Bacon capitalized and ripped the second spot away from K. Thomas on the bottom in response and began to track down Courtney instantaneously.
On the final lap, Bacon clocked in with his fastest time of the race and got a nose underneath Courtney entering turn three. One more lap might have been all Bacon needed, but it was not to be as Courtney secured USAC AMSOIL National Sprint Car feature win number four on the year ahead of Bacon, K. Thomas, T. Thomas and Schuerenberg.
In a 30-lap span, Courtney continuously searched for the right line at the right moment, venturing from the bottom to the middle to the high side throughout the event, then used a diamond maneuver during the final laps to keep all challengers at bay for his fifth career win in the series.
“My car was pretty good on the bottom in the B-Main,” Courtney recalls. “I was set up to run there most of the feature. The bottom went away and it got slick down there toward the end. Hunter showed me a nose with seven or eight to go, so I made the jump up. I knew I was going to have to make her wide and make it tough for those guys to get by me on the final restart. Doing this for a living, you got to know when to go where. Luckily, we made all the right moves tonight.” 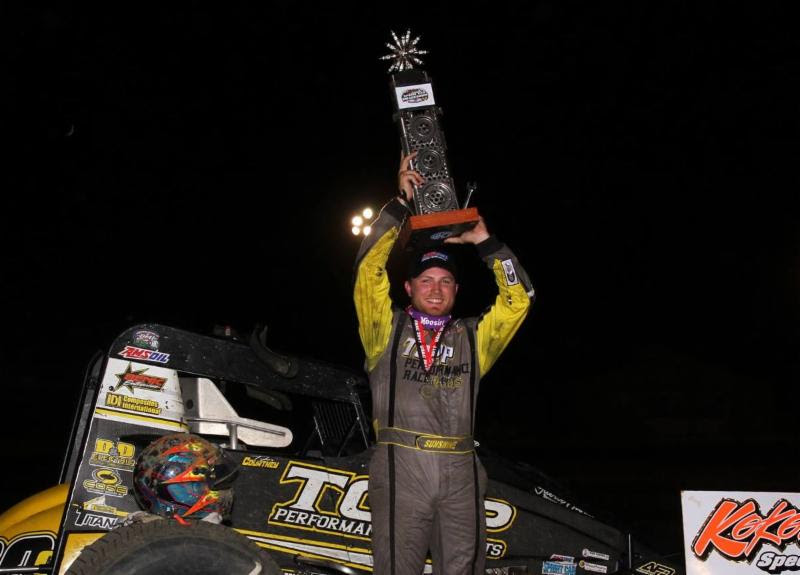 “My first USAC start was the first Smackdown. To watch it come full circle is pretty cool. I know it’s not my first USAC win, but to get my first Kokomo sprint car win tonight is pretty dang special. This place is tough to tame and the guys who’ve won here are some of the best to ever do it. This one ranks right up there with a lot of the big ones I’ve had. Plus, if you would’ve told me I’d win four USAC races in one year, I would’ve said you’re crazy. I would’ve been happy just winning another one!” – Tyler Courtney
(Rich Forman Photo)