Denes, McDonough and Norman Win on Saturday at WGI 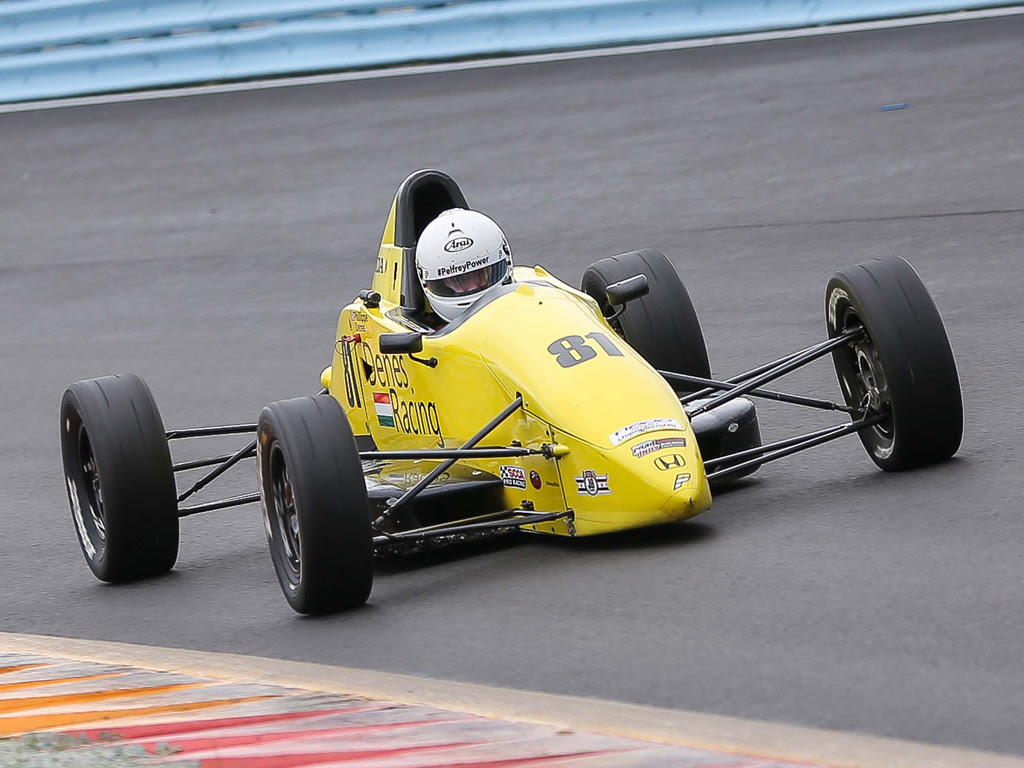 Changing conditions threw a curve ball to F1600 Formula F Championship Series competitors, with Phillippe Denes taking the win for Team Pelfrey on a quickly drying Watkins Glen International in round four of the 2016 season. K-Hill teammates Peter Portante and Neil Verhagen completed the podium, with the top three taking a chance on slick Hoosiers on a wet track, and benefiting as the sun came out, able to charge to the front.

Denes started from pole for Team Pelfrey, but opted for dry tires on a wet track. With the green flag out, he went off course in turn one and dropped back through the field, as Ben Auriemma and Max Mallinen stormed to first and second and opened a huge lead on rain tires.

As their pair of Spectrums were seemingly running away with the event, the sun came out and the track started to dry. The lap times quickly came down and those who were able to survive the first five laps on dry tires came back to the front, with Denes taking his first career victory.

“We had a big moment on the start, and then the sun came out and I was like ‘yes,'” said Denes, in the No. 81 Team Pelfrey Mygale/Honda.

Portante and Verhagen, both Road Atlanta winners, had a spirited race for second with Portante beating Verhagen to the checkered flag by a car-length.

Completing the top five, Auriemma soldiered on for Exclusive Autosport but was helpless on a dry track, as was Mallinen’s Swan Spectrum, which came home in sixth. Auriemma has showed the rain pace all weekend, also fastest in wet practice by 1.8 seconds.

Among the storylines, Will Harvey went from last to third in just two laps but on rain tires, and came home seventh in the end.

Points leader Steve Bamford spun on the opening lap and finished tenth, winning the Masters Class ahead of Dan Pyanowski and Mike Scanlan. 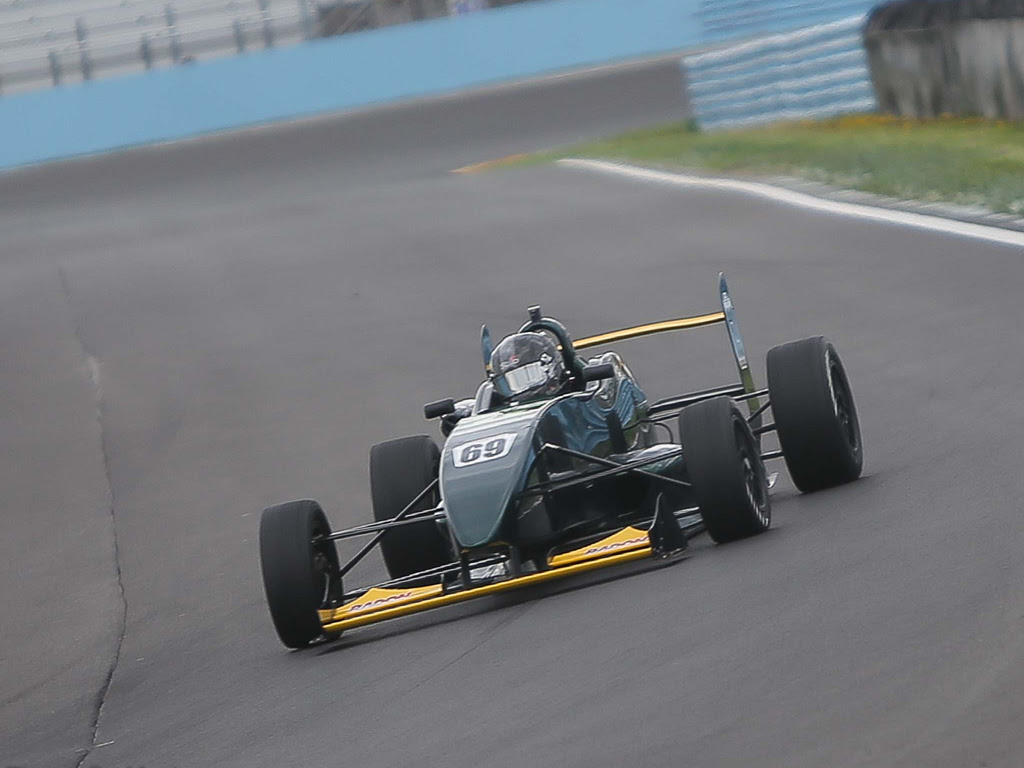 The skies opened in dramatic fashion mid-way through the F2000 Championship Series race, turning Watkins Glen International into an ice-rink and allowing 2006 F2000 Champion Matt McDonough to score victory in a lap that took over three minutes and 20 seconds in a race of survival to the checkered flag. Jayson Clunie finished second and Robert Wright slammed the inside pit wall trying to steal the win in a side-ways drag race to the line, and settled for third.

McDonough, driving the No. 69 Radon Sport entry, won the Glenn Phillips Memorial Classic, a race run in memory of the team founder of GTP Motorsports. McDonough and GTP won the first F2000 Championship in 2006. McDonough last drove in F2000 in 2013 and most recently competed in a 24-hour slot car race. It is the first win for the Radon chassis.

“I had a great start and moved up through the field,” said McDonough. “It was dicey the first few laps at the front and I was able to stay on the back of the lead pack and hang out. Then the rain came. I said on the radio I wasn’t sure about staying out, I was going to give it one more lap. The first turn was simply mayhem. I braked early, I could see cars spinning in the mist, I had no brakes.

“I did a 360 on the race track, I went into the turn one runoff and I was straight, I took the brakes off and bump-started the car. I passed four or five cars that stalled,” continued McDonough. “I drove back on the track, in the distance I saw Tim Paul hit the wall in turn 2 and figured if I made it past him I’d be in the lead. It was dry down the back straight the lap before, but by now the whole track was wet. I’m excited to win the first Glenn Phillips Memorial race. He was a big part of my racing career and I really believe he had a hand in today’s chain of events.”

The last lap will be noted in F2000 history, as the field was working a full course caution when the skies opened. With mostly all cars on dry tires, the green flag came out, and almost the entire field had an off-course excursion in the run to the checkered flag, with the race ending before its time limit to adverse track conditions.

In the lead at the restart was points leader Steve Bamford, who took the race leader earlier with an aggressive move on the outside of turn one on lap one, taking over from pole position winner Dave Weitzenhof.

Davy D’addario would finish fourth with Bamford in fifth after going off on the last lap of the race. John McCusker and Dave Weitzenhof followed, with Bob Reid, who changed to rain tires during caution in eighth and Jenna Grillo in ninth for K-Hill Motorsports.

Contenders David Grant and Tim Paul were 10th and 11th at the checkered flag,
respectively, both restarting in the top five but going off on the final circuit of Watkins Glen in heavy rain. 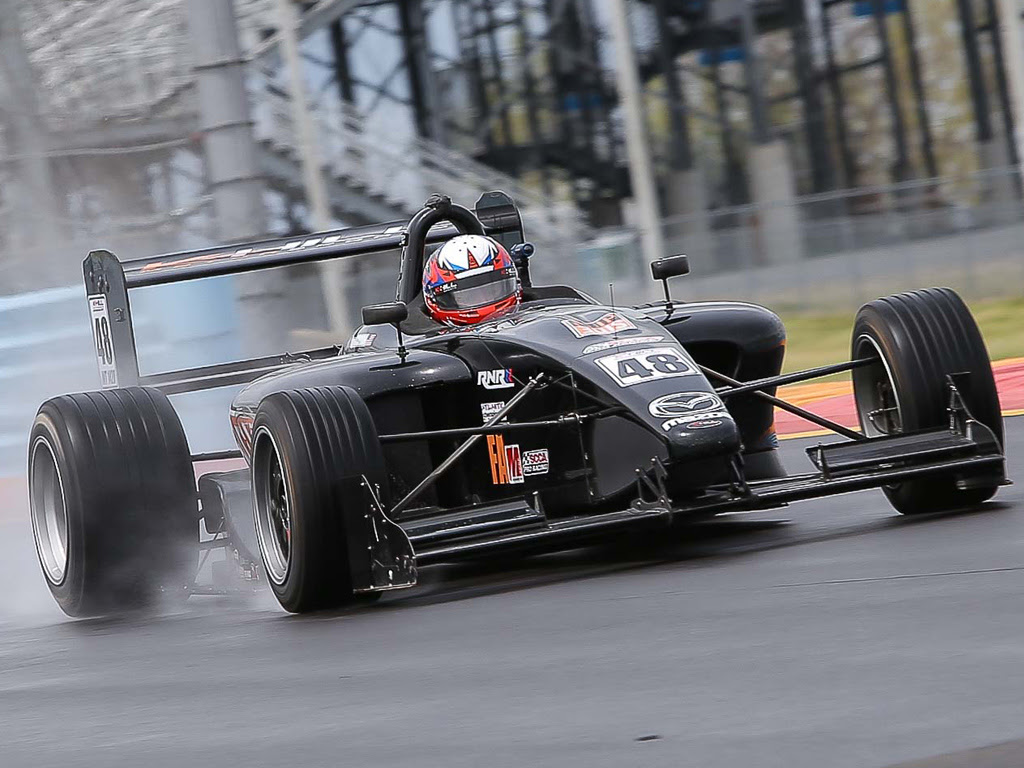 From the outside of the front row, K-Hill Motorsports driver Ryan Norman took his second win in three 2016 Atlantic Championship Series starts in a wet race at Watkins Glen International. Driving the No. 48 Swift 016/Mazda to victory lane, Norman finished first in a commanding performance ahead of Dudley Fleck, who passed Keith Grant for second place on the final lap. Bruce Hamilton won the Atlantic Challenge in his K-Hill Swift 014/Toyota.

From the drop of the green, a challenging course let the aspiring Norman show his skills as he opened up a 38-second lead in just a handful of laps to start the race, passing pole winner Grant on the opening lap.

Norman’s lead was eliminated with a full-course caution, but as the track dried, he opened up the pace again, finding water to keep the tires cool, taking the victory in the timed raced.

“We got a great start and passed for the lead going up the esses,” said Norman. “I tried to stay consistent and find water to cool the tires off. I slowed down to cool them off too. Thanks to K-Hill.”

While Grant looked set for second place points for Polestar, Fleck charged past in the late stages of the race, tracking down and passing Grant on the final lap to take second, his best Atlantic finish to date.

“Keith slowed down and we were able to pass him. I never knew if the track was fully dry, I was just trying to go a bit faster each lap,” commented Fleck.

Grant settled for third in the No. 40 Polestar entry.

“It was changing conditions the whole session,” said Grant, the 2015 Atlantic Champion. “It started to dry and the track got quicker, and then it rained again. I let up too much and Dudley got by.”

In the Atlantic Challenge Bruce Hamilton led flag-to-flag for K-Hill for the win, ahead of Comprent’s Bob Corliss, who won the previous round at Road Atlanta. In third place, Mark Sherwood took home trophy hardware in his sleek Ralt RT-41/Toyota after battling through clutch issues earlier in the weekend.

“Well it was a challenge today,” said Hamilton. “The new (track) surface is just a ball, even in the wet.”

The action from Watkins Glen continues on Sunday with two F1600 races and single races for F2000 and Atlantic.